You Are Not On Your Knees Yet

Home
Prayer Resources
You Are Not On Your Knees Yet

A call to humble ourselves. A few weeks ago someone we know was watching the news item when the Italian city Mayors stood in their empty town squares, heads bowed, with their flags at half mast, as they mourned the deaths to date from Covid-19. As they watched they asked silently: “Lord, how much longer is this going to go on?” Immediately they heard the words: “You are not on your knees yet.” This could have been a word for them only, but as they pondered it the impression they had was that this was addressed both to the nation – i.e. economically, as a society etc. we were not yet on our knees and desperate enough to turn to God – and, more importantly, to the Church. Yes, there was an unprecedented tsunami wave of prayer rising up around the globe, but as God’ s people we still had not humbled ourselves to the degree that God was asking of us. Interestingly, the following Saturday a major national paper had headlines that both New York and the UK economy was ‘on its knees’ . On 5 April there was the first in what has become a regular Sunday prayer time for the whole island of Ireland. Supported by all major denominations in both north and south, Christians pray from 3-4pm and, for the last 10 minutes, they are asked to kneel and humbly cry out to God to have mercy on their communities. In the last few days we have received two completely separate calls to pray as a nation on Saturday 25 April. One of these is from the Christian organisation Voice for Justice, which has produced a historical briefing referring to two former plagues, in Rome in 590AD and Mexico in 1631. On both occasions the people cried out to God for deliverance on 25th April and, according to the article, on both occasions the plague miraculously and suddenly stopped. You can read more about this at https://vfjuk.org.uk/ Our God is a God of suddenlies! The Bible has many examples of God sovereignly and suddenly impacting the lives of individuals and nations – radically changing their direction and destiny.

And there are many more. No-one in any of these stories was prepared, none of them was ready, for God’ s suddenly…….. that moment when He intervened in their lives and in many cases changed human history. And God’ s suddenlies continue up to the present day. All the revivals we read about started as suddenlies – the times of Wesley, of the American outpourings, Azusa Street, Wales, Ireland, north-east Scotland, Lewis – allsuddenlies just as in Acts 2. Before many of them happened Christians were crying out to God to send revival. Yes, Christians were travailing in prayer, to use the old language. That was a common denominator underpinning almost all these revivals. But when it happened, it was a surprise, a God ordained suddenly! So, coming right up to date…

But there’ s another side to this coin……..

In Job chapter 38, God starts to remind Job of just who He is and what He has done. In verse 11 He says: “..when I said, ‘Thus far you may come and no farther; here is where your proud waves halt ‘?” In this verse and those preceding it, God is talking about the seas, but the point is…our God is the God who says to any situation: “Thus far and no further.” and…”Here is where your waves halt.” Could this Saturday 25th April be another miraculous suddenly, when God declares: “Thus far and no further”? I don’ t know, only God knows. What we do know is that prayer changes things! So, whether on Saturday, on Sundays at 7pm, or whenever you are praying about this crisis, while not forgetting to pray for our Governments, those on the front line, those working tirelessly to find the vaccine and those in mourning, may thousands of us fall to our knees, confessing and repenting of the sin of our nation and the compromise of the Church with the ways of the world, crying out to Almighty God for His mercy, for His deliverance from this ‘plague’. It may not be killing tens of millions as in past times, but it is killing the livelihoods and future prospects of millions around the world. Ask God to declare to this virus: “Thus far and no farther,” and in His mercy to declare a halt to its waves! May God bless you and keep you safe, as you continue in prayer and intercession for your families, communities and nation!
Alistair Barton is the Director of Pray for Scotland
www.prayforscotland.org.uk 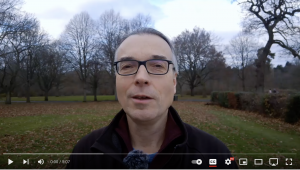 As we move into 2022, Laurence Sharman the Executive Director at the World Prayer Centre shares his thoughts and prayers for the

A global update about what God is doing amidst the darkness.

The Cross – The Great Exchange

An Easter message about the power of the cross.

15 Days of Prayer for the Buddhist world