Mehdi grew up in a moderate Muslim family. When the still small voice of Jesus began to call him he first resisted, but ultimately he could not challenge the beautiful truths he found.

As a Muslim, Mehdi often had the feeling that he was failing on many sides. One day he had an unsettling thought: “I’m lacking in so many ways. I will not go to heaven anyway. What is the point?” Then one day a voice inside called him: “Go and find out about Christianity.”

Mehdi was startled by this strange thought. Why would he find out about Christianity? He didn’t know any Christians and he thought Christians were odd people. On top of that, in Iran it was dangerous to be a Christian. Why would he choose the possibility of prison or death when he had a good life?

The unusual thoughts continued, urging him to find out more. One day, out of curiosity, he took a bus to a church in a different part of the city. When he asked the pastor if he could inquire about Christianity, the man firmly replied “No!” Later Mehdi discovered the government had forbidden church members to answer Muslims’ questions about faith.

‘Find out about Christianity and learn how they think about God’

He tried to visit other churches, but got the same response. He was ready to give up when the Lord spoke to him once more: “Go and find out about Christianity and learn how these people think about God.” Mehdi wondered if he had too much alcohol to drink that evening. He tossed and turned that night, unable to sleep, conflicted by his seemingly futile search.

Then he remembered a friend who worked for a security force investigating illegal ‘underground’ activities, including ‘underground’ Christianity and illegal evangelism. Mehdi thought this might be his last chance, but he would also be taking a huge risk. “I decided to bring up the issue playfully,” which paid off. His friend gave him the address of a church that he knew was open to Muslims.

With anticipation building in his heart, the following Sunday he went to the address his friend gave him. When he got close, he could hear a service going on. A man came out and asked: “Do you want to come in?” Mehdi took a deep breath and said: “Yes!”

“The feeling I had when I entered the church was something I’ve never felt before,” Mehdi recalls. “It felt so peaceful.” He sat down in a pew, feeling overwhelmed with emotion.

After the service a man came up to him and asked: “You’re here for the first time, right?’ “Yes,” Mehdi replied. “Can I ask you some questions about God?” “Not here,” he said hesitantly, “but please come to my home.”

Mehdi went to the man’s home and peppered him with questions. The answers seemed strange, but in a good way. The man talked about heaven as a place in God’s absolute presence, a place in which your spirit is totally at peace with your Creator. “I hadn’t heard about the Christian idea of heaven before, but somehow his words made complete sense to me,” Mehdi said.

“He also told me that God isn’t a far-away person but someone who created the earth and put us as humans in the center. He made us in his image. He even gave us a piece of his very own Spirit. With the Christian God I was welcome the way I was. God was like a loving Father. This was a big difference from Allah, who would punish me for any small thing.”

Still, his Muslim background was too strong to just let go. He wrestled in his heart. Mehdi told God: “If you really care, please show me the way.” One of his friends became alarmed by his sudden interest in Christianity and sent him to a religious leader specially trained to help Christian converts from a Muslim background return to Islam. But for everything the religious leader told him about Islam, Mehdi found an alternative in the Bible that seemed much better.

‘It was like the curtains had been opened for me’

“It wasn’t a specific moment, a lightning flash or a dream. It happened gradually that I became a Christian. It was like the curtains that had been hanging in front of the truth for a long time had been opened for me. What I saw was beautiful,” he confesses.

“I didn’t tell my family: ‘Surprise! I am a Christian now!’ They discovered gradually. I had always been a bad boy and I started behaving differently. For instance, I brought the JESUS Film home and watched it with my little brother. They’d expected me to go on drugs, or get in trouble with the police. They didn’t expect me to become a Christian.”

His parents weren’t happy about his new faith, but they didn’t give him a lot of trouble. After being discipled, Mehdi eventually chose to leave Iran. “I was 18 when I left home. Now I am 27. I haven’t been back in Iran since. It’s a big sacrifice. But despite everything, I am happy and thankful.”

Celebrating 40 years of CARE as a Christian voice for truth. 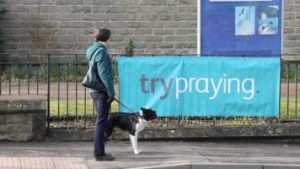 Is It Time To Trypraying?

Trypraying is a simple booklet encouraging people to pray for a week.

The world is beginning to see this time as a time to reset.