It was a great pleasure to welcome Fiona Bruce, MP on to June’s Global Prayer Watch. Our focus for prayer was on ‘Freedom of Religion or Belief,’ specifically praying about the conference under this title that is being hosted in London, by The UK on Tuesday 5 July and Wednesday 6 July.

We opened our time in worship – as we often do – exalting Jesus, the King of kings and declaring His greatness as we moved into hear more information from Fiona about the upcoming conference and how we can pray. Our hearts and minds very much focussed on praying for the conference, but also praying for the millions of people whose lives are affected daily and are persecuted for their faith.

We were reminded of Article 18 of The Universal Declaration of Human Rights which says that “everyone has the right of freedom of thought, conscience and religion; A right which includes the freedom to change your religion or belief and to gather together with others in worship.”

As we prayed together these were the main areas that we covered, firstly for The Freedom of Religion or Belief Conference:

1.      That the conference, hosted in London by the UK will make a significant difference.

2.      For the Government ministers and delegations, the Faith & Belief Group Leaders and Civil Society Activists from over 50 countries as they gather to discuss global concerns about freedom of religion or belief – Pray that they will agree some real and practical commitments to help change the current climate.

3.      For Fiona Bruce, MP – The PM’s Special Envoy for Religious Freedom – as she speaks at the conference – for clear communication and a boldness to speak about this marginalised subject.

4.      For the next generation, that they get inspired to become champions and ambassadors for freedom of religion or belief across the world.

5.      Amongst the many of the current issues that affect our world today and impacting on global insecurity and which seek to demand our attention and our time – this conference provides an amazing opportunity to shine the light on freedom of religion or belief – a right which is often under recognised and under addressed – both the Evangelical Alliance and the World Evangelical Alliance will be attending the conference and meeting conference delegates and Government officials to share specific action that the state and government can undertake to advocate for persecuted Christians overseas – pray for those conversations and for divine appointments.

6.      We prayed that many will hear, take note and act and will make a difference.

1.      For the candidates for next year’s election

2.      For the general economic situation – inflation is too high to measure and no employment

3.      We prayed for the Church which is targeted with extreme violence

1.      The Indian Governments silence on persecution of Christians.

2.      Major media outlets promoting hatred and violence of minority groups and silent on attacks of Christians.

4.      Pray for unity in the body of Christ which at present is going from bad to worse. A unity that can bring revival.

As we finished, we recognised that this is far too big a subject for one Prayer Watch and so our encouragement right across the room was to keep on praying, supporting and standing with our sisters and brothers who face horrific persecution, but to also keep praying for those who can make a difference as they speak out for justice and truth.

Be part of building the Eternal Wall of Prayer. 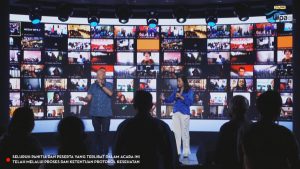 Global prayer and worship gathering in Jakarta, Indonesia In May 2022, leaders gathered in Sentul City, Jakarta, to celebrate the 10thanniversary of 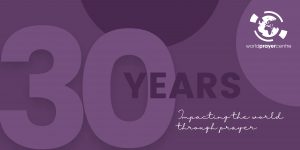 30 Years impacting the world through prayer