The situation in Northern Ireland

First of all, may we say it’s a privilege to be asked to provide some prayer pointers for Northern Ireland.  We really appreciate the many faithful intercessors who uphold and support us in prayer.  Being asked to provide this article brings quite a challenge.

Because this is Northern Ireland it should not surprise us that the issues are complex and are influenced by deep-seated historical roots and wounds.  We have had conflict within a divided society, then a peace agreement, but no real deep reconciliation.  Both nationalists and unionists have been seeking totally opposite outcomes from the political process and both have their political ideologies concretised in covenants. These two parties are best described as being in a counter-covenantal relationship. Many of the issues we face have profound political as well as underlying spiritual aspects. This means that sincere Christian people can frequently find themselves in disagreement over the nature and the solutions to our difficulty.

At the risk of being very obvious, therefore we should initially remind ourselves that we pray for God’s Kingdom to come, and for His will and purposes to prevail.  To help us to be as balanced and objective as possible, we asked a number of faithful intercessors in Northern Ireland to give us some pointers for prayer.  This article is a compilation and summary from the responses we received.

To begin to understand our present situation, it is worth recognizing that politically things may be very fragile indeed.  With politicians acutely aware of impending elections there is a battle for position and for advantage and party politics can come into play in a big way. Also, with all that has happened around Brexit and the protocol there is also a growing lack of trust and respect for our politicians. As always therefore, we would hope and pray in these days that people would discern what is truth, would act/behave with righteousness and in a measured manner.  Particularly that God’s people would model the image of Jesus in all situations as opportunity presents.

In considering how to pray it is helpful to consider some aspects of context….

In light of the above, a few prayer specifics could include ….

So far, in this article we have tended to focus on negative aspects of our situation with a hope that people may respond and pray into them.  It is however worth commenting on a few positives, and to remember prayer for these as well.

COVID and lockdowns have had many in the grip of fear, and in compliance to limitations in freedom and mixing etc.  Without denying the virus, it is clear that it has been be a potent tool for influencing peoples’ perceptions of the present.  There are also now clearer distinctions between Christian and non-Christian with all the recent changes in law and the morality that for so long underpinned the law. The whole ‘in-between, on the fence’ position is becoming impossible with people being shaken into choice.  We have noticed increased hunger for spiritual reality amongst many, and there has been growth in evangelistic projects and conversations (often with strangers on the street) that might not otherwise have taken place.

It is important that the wider church recognizes all that is going on without being distracted by it or setting her agenda to it. There is huge apathy and disconnectedness within the churches.  Many individuals are not returning after lockdown.  This is not necessarily just luke-warmness but also can be disillusionment with the church as it is.  Whilst there can be disappointing levels of desire or urgency among Christian’s we see this can be an amazing opportunity for God to do something new and has often been the pattern in awakenings. There are some exciting examples of light in the darkness.

It is important in all these things that we do not lose HOPE.  It is vital that we see things from both a heavenly perspective and an earthly one.  Pray that our anchors will hold and for the faithful remnant to both gather together and to be equipped for the days ahead.

Change Of The Tide

New book on revivals in the UK. 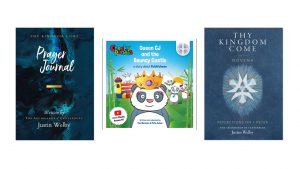 Take part in Thy Kingdom Come 2022 with these three official resources, designed to help your entire church join in with ten