Discipleship: An invitation to holiness

I had my ‘Damascus Road’ experience at the age of seventeen. To be factually correct it was a ‘Cowley Road’ experience! In June 1976, in a small hall above the Greenshield Stamp shop (a pre-tech loyalty points system) on the Cowley Road in Oxford, the scales fell from my eyes as I heard about the saving grace of God. In that moment I was transfixed, even spellbound, by the preachers’ message; without question this was a transformational moment. Surrender had been a term I’d only understood in the context of white flag waving, but on that day, moved by the Holy Spirit, surrender of a different guise touched my soul. Though not fully realising what was happening at the time, I did more than ‘invite Jesus into my heart’, I subjugated my will to God’s. In that grace filled moment I had begun a pursuit of Christ, to become a follower of Jesus, a disciple of Jesus, on a journey of surrender that would last a lifetime.

Before long, and with some trepidation, with tracts in hand I was on the streets evangelising my home city of Oxford! For those of you that have never heard of tracts, these were mini pamphlets, often illustrated like comics that told the story of God’s love. Well, that’s what we had convinced ourselves! I remember opening one of these tracts that included the telling of the story of judgement day, a day of global reckoning. As I looked at the scene the illustrator had captured of that day – there was a solitary figure stood before God. Behind them a backdrop, a cinema screen the like of which it is hard to comprehend. In front was what appeared to be the assembly of everyone who had ever lived, all waiting their turn to be held to account for their every evil thought and deed. One by one their sins would be revealed, frame by frame, on this supersized screen for all to see. At that moment, that solitary figure looked remarkably like me! As I read of this final day where all would be revealed, my heart started to beat faster as my mind ran wild, recounting my every sin. At seventeen I’d hardly lived, yet a combination of fear and embarrassment gripped my soul as I imagined my every thought and deed flash before this massive audience. Despite my encounter with God’s grace, holiness was a seemingly impossible goal.

In the late 70’s Pentecostalism was a purveyor of holiness, but holiness of a specific brand. The overarching narrative advocated the purging of sin, at its extreme, the doctrine of Sinless Perfectionism[i]. My experience was that sin and sinfulness was at the forefront of a disciple’s consciousness. Therefore the primary measure of ones’ progress to attaining a state of holiness was measured by the absence of wrong doing (sin). This also resulted in a codification of moral/social behaviours that were deemed unholy. These included women using make-up, going to the cinema, any type of consumption of alcohol and watching the TV or visiting the shops on a Sunday. I recall a severe reprimand from my pastor when he discovered that I had used brandy to flambé bananas! Remiss though this was according to the holiness standard of day, this wasn’t one of the sins I feared had been framed by eternity’s watching camera! Successfully living in compliance to this unwritten regulatory framework was a huge step towards the much sought after designation of being holy. If your conviction is that holiness is solely defined as the absence of sin then this approach was not without benefit.

The pursuit of holiness by solely implementing a regime of purging ourselves of sin is a poor facsimile of its true reality. We can too easily become professional law keepers. Of course holiness is connected to being separate, distinctive and obedient (Lev 18:1-5), but holiness is not simply a summons to be sinless, it’s more than that. The accolade of ‘beauty’ that a gardener may receive for his handiwork is an attribution that means more than the absence of weeds in his garden. This classification is more likely to be connected to what is present, not purely what is absent.

Discipleship – An invitation to holiness

Holiness is an invitation to be like God. Leviticus tells us that Moses makes this invitation. This is the very summons Jesus makes in Matthew’s Gospel when he quotes Moses’ words in Leviticus 19:2.

“Speak to the whole congregation of the Israelites and tell them, ‘You must be holy because I, the Lord your God, am holy. Leviticus 19:2

‘Therefore you are to be perfect, as your heavenly Father is perfect.’ Matthew 5:48

What are both Moses and Jesus advocating for? I am convinced they are advocating for the same thing –discipleship. At the heart of discipleship is a call to follow, to imitate God. This is an invitation to holiness, to be like him, to bear his image. If I were to ask myself what is the purpose of my life? My first answer would not be – the eradication of sin, I would have to answer – to be like God. This moves the starting point in a call to holiness away from solely weeding out sin to asking the question how I can be like God, how do I display the beauty and goodness of God?

So, what does it mean to be Holy as God is Holy?

This is where ancient Jewish thought can help us. They believe that the answer to the question of who is God is answered by what He does. Therefore the more we do like God the more we become like Him. If we do what God does we are pursuing holiness.

If holiness is a summons to be like God, and being holy is doing the things God does, what do we need to do? The ancient Jewish approach (that remains the same today) to answering the question could teach us much. Their conviction was that the study of, and obedience to the teaching of scripture was the way to live life to its full. This approach led them to answer this question by beginning in Genesis and then working their way through the scriptures.

These are simply yet profound imitations of God that become a means by which they pursue  holiness – doing like God does. It is these ancient Jewish principles that are at the heart of Jesus life and teaching. He too, tells us that He has come to imitate God.

“Very truly I tell you, the Son can do nothing by himself; he can do only what he sees his Father doing, because whatever the Father does the Son also does. John 5:19

Jesus is simply saying I, too, am imitating God. The call therefore to follow Him is a call to imitation – this is the invitation to holiness. Jesus’ instruction recorded in Matthew’s Gospel ‘Be perfect even as your heavenly Father is perfect’, in another translation reads ‘let there be no end to your goodness, like there is no end to Gods goodness’. In the calling of His disciples Jesus summons them to holiness – to goodness. If He is a giver, so they too, should be givers. Why does He ask them to love their enemies because God does! He invites His disciples to do as God does.

A call to holiness by imitating Christ.

After the Gospels were written the principle became not imitating God but imitating Christ;

‘Husbands love your wives as Christ loved the Church and gave Himself up for her’ (Eph 5:25).

‘Therefore be imitators of God, as beloved children; and walk in love, just as Christ also loved you…’ (Eph 5:1,2)

Paul follows in the footsteps of Jesus and invites the believers in Corinth to ‘Be imitators of me, Just as I also am of Christ’ (1Cor 11:1). He summons those in Philippi to do likewise ‘…join in following my example,…’ (Phil; 3:17) In ancient Israel’s’ Rabbinic tradition, the reason you would have joined a Rabbi was not only to learn from his teaching of the scriptures, it was also a call to follow him and imitate him as he imitated God. Paul uses this well understood practice and calls his disciples to imitate him as he was imitating Christ. His understanding of the transformational power of being known leads him to draw his disciples into a relationship where they become totally embroiled in his pursuit of holiness. The truth is, people are rarely transformed by sermons but they are transformed by relationships. Imitation, and therefore holiness, is a shared journey.

The purpose of writing this short article is simply this; I want to encourage you to change your perception of holiness from attempting to purge yourself of sin and instead receive with an open heart the invitation to imitation – to be like Christ and. in doing so, pursue holiness. To be more fully human, to be a better person, is to do the things that Jesus did. This is the pathway to holiness. One more suggestion! With whom are you embroiled? By this I mean two things. Firstly, who is your Paul? Who is it that in some shape or form is your Rabbi – a person you respect, who’s pursuing Christ, is willing to be known and so shares the journey of transformation. Secondly, who is following you as you follow Christ?

Please don’t misunderstand me, we are of course, all primarily disciples of Jesus, He is our Rabbi. However the bible is equally clear that living life fully, and as He intended, cannot be done in isolation.  A discipleship philosophy coined by ‘me and Jesus’ would be to live an impoverished existence, deprived of the vitality of heaven. Don’t allow yourself to be robbed of the glory of God.

[i] Sinless Perfectionism, in short, it holds that it is possible for Christians to completely defeat sin in the present life and to live holy lives like Jesus did.

Praying For Our Government

Praying for Boris Johnson and his new government. 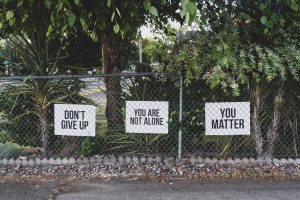 Five Scriptures To Pray For Someone Struggling With Mental Health Issues

During Mental Health Awareness Week, pray for people that are struggling with mental health issues.

Join us praying for carers as Carers week starts 8-14 June.

Ten Ways to Pray for Life